One of the finest units to grace the roll-call of RAF Bomber Command units during the Second World War was 103 Squadron.
Immortalised by Don Charlewood in his epic classic of wartime literature,
No Moon Tonight, the squadron was at the forefront of the conflict from the first to the last.
After its outdated and outperformed aircraft were literally knocked out of the fight during the futile campaign to save France, the squadron returned to English soil where the remnant rose phoenix-like from the ashes of defeat,
with new equipment, committed itself again to the battle.
Even during its bleakest time, when briefly equipped with the unpopular early versions of the Halifax, it retained its esprit de corps.
The mighty Lancaster saw it through the campaigns against the Ruhr, Hamburg, Berlin, railways, oil, V-Weapons and tactical support for the land forces,
and then the second Ruhr offensive in the autumn of 1944.
The squadron’s casualties were amongst the highest sustained by any bomber unit active throughout the five years and eight months of hostilities, but so also was the number of operations it flew and sorties it launched. Over 100 photos, many contributed by historian David Fell, grace this history of a magnificent unit.
103 Squadron Profile Paper Back £15.00

103 Squadron Profile Book will include a free pack of Bomber Command Christmas cards worth £7.50

Be the first to review “103 Squadron Profile” Cancel reply 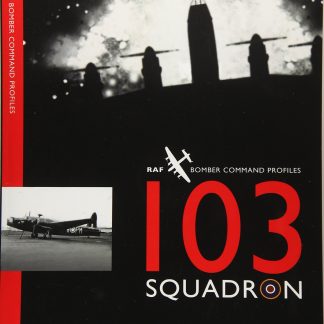