Most of the deeds of Bomber Command’s war are well documented. In the main, the wartime record of each squadron’s service,
written with reasonable accuracy at the time, is available for scrutiny.
There is just one exception. Such was the secrecy surrounding the activities of the moon squadrons at Gibraltar Farm,
which became RAF Tempsford, that records, initially at least, were a luxury only occasionally indulged in.
Brief hand-written entries allow a glimpse into this end of the Special Operations Executive, an organisation,
which dispensed information on the strictest need-to-know basis. It was not unusual in the early days for a pilot to arrive at Tempsford on posting,
only to kick his heels for days and even weeks, before being given an insight into the station’s activities and his part in the grand plan.
Later on, the demand to service resistance organizations saw crews pressed into service with much greater alacrity, but the level of security never wavered.
Chris Ward’s 138 Squadron Profile, draws in part on the unique insight of F/O Freddie Clark,
who flew from Tempsford between late January and early April 1944. Each sortie was an operation in its own right, and had to be dealt with individually.
This Profile provides the necessary facts, supplemented by the personal stories of some of those who took part,
and includes a large number of photographs including a collection contributed by Piotr Hodyra,
relating to the squadron’s ‘C’ Flight, manned by Polish aircrew, between April and November 1943.
Overall size of book 8.5 in x 11 in. £15.00
138 Squadron Profile £15.00
138 Squadron Profile Book will include a free pack of Bomber Command Christmas cards worth £7.50

Be the first to review “138 Squadron Profile” Cancel reply 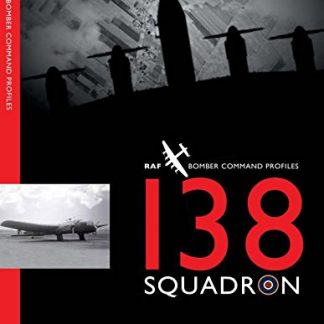