Polish airmen came to Britain in 1939 and 1940 with a burning anger,
which could only be assuaged through the avenging of the injustices visited upon their people and homeland by the Nazi regime.
Unlike the British, who only anticipated invasion, the people of Poland had experienced it in all its hateful forms,
and its people continued to suffer under the merciless yoke of tyranny. What the Poles asked for was simple; to be given the means to hit back,
and from the moment this was provided, they launched themselves at every opportunity with a fanatical, yet measured, determination,
never doubting the eventual outcome, or their ability to help bring it about.
It was a case of small beginnings, four squadrons formed in the north Warwickshire countryside during the summer of 1940, equipped with outdated,
ill-equipped Fairey Battles, a type effectively knocked out of the Battle of France with catastrophic casualties in less than a week’s fighting.
The arrival of the Wellington towards the end of 1940 provided a greater punch, and for the next three years 300 Squadron carried on with this trusty type,
as a front-line bomber unit in 1 Group, and then predominantly on mining duties as the Wellington approached the end of its operational life.
The dwindling number of Polish aircrew led to the disbandment of one Polish squadron, while another was posted to Coastal Command,
and, eventually one to the 2nd Tactical Air Force. This left 300 Squadron to fly the flag for Poland in Bomber Command and the passion,
commitment to the cause, raw courage and press-on spirit of the airmen who served with 300 Squadron may occasionally have been equalled,
but never surpassed. Their deeds will live on as part of the glorious history of RAF Bomber Command.
Chris Ward’s detailed narrative is complemented by numerous previously-unseen photographs from Grzegor Korcz.
Overall size of Book 8.5 inch x 11 inch
300 Squadron Profile £15.00
300 ( Masovian) Squadron Profile Book will include a free pack of Bomber Command Christmas cards worth £7.50

Be the first to review “300 (Masovian) Squadron Profile” Cancel reply 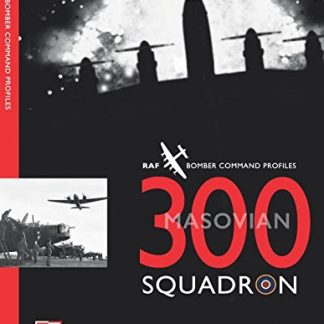