83 Squadron played a magnificent part during the dark days of 1940 and 1941, roaming deep into Germany to attack economic and industrial targets,
albeit, to little effect. Amongst its early establishment was P/O Guy Gibson, who was to achieve immortal fame later on.
With 1942 came the passing of the Hampden and the brief interlude with the ill-fated Manchester, but then came the Lancaster.
When the Pathfinder Force was formed in August 1942, 83 Squadron was selected as a founder member,
representing 5 Group, and drawing fresh crews from its squadrons. It continued proudly to serve the Pathfinders, or 8 Group, as it became,
through the campaigns against Italy, the Ruhr, Hamburg and Berlin.
Its commanding officers were renowned for leading from the front; three lost their lives on operations, two of them during the Berlin offensive.
In April 1944, advances in bombing tactics led to the effective independence of 5 Group, and 83 Squadron returned to its former family to perform a marking and illuminating role on permanent loan from 8 Group until war’s end.
There was never a time when the influence of 83 Squadron was not felt within the ranks of Bomber Command. It distinguished itself with outstanding performances and below average losses from the first day of the war to the last.
Overall size of Book 8.5 inch x 11 inch
83 Squadron Profile £15.00
83 Squadron Profile Book will include a free pack of Bomber Command Christmas cards worth £7.50

Be the first to review “83 Squadron Profile” Cancel reply 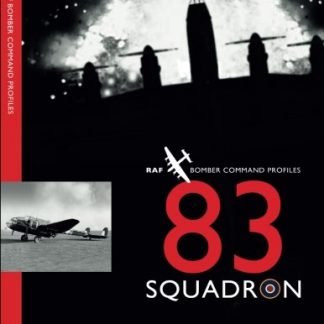