Nothing can stop us Book

Nothing Can Stop Us
By Steve Hepworth

The History of 514 Squadron RAF

514 Squadron served in the RAF’s No. 3 Group, Bomber Command, between September 1943 and August 1945.
After a short period of operations from RAF Foulsham, the squadron transferred to its permanent home at RAF Waterbeach, Cambridgeshire,
in December 1943, some aircraft travelling from the old base to the new via a raid on Berlin.
It was, of course, the people of the squadron who were its heart and soul.
Supported by hard-working ground crew,
the focus inevitably was on the airmen who climbed into their Lancaster bombers,
risking and often losing their lives in the ceaseless battle to beat the most evil regime Western Europe has ever known.
224 separate crews have been identified from the squadron’s Operational Record Book.

The trilogy examines every aspect of a typical, and unsung, Bomber Command squadron and is quite possibly the most detailed such work in its genre.

The war cost 514 Squadron 88 Lancasters shot down, crashing or damaged beyond repair on operations and a further three on training flights.
The real cost, though, was its people, 437 of whom gave their lives serving with 514 Squadron.
The boys from the ‘Beach, as the airfield has always been known, will never be forgotten.

The first volume, ‘Nothing Can Stop Us’ tells the narrative history of the unit, along with personal accounts from many who served.

Nothing Can Stop Us 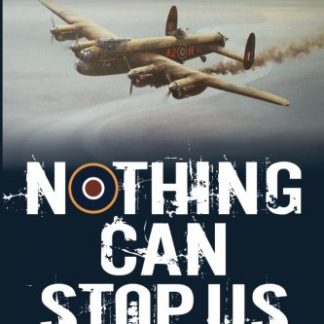 You're viewing: Nothing can stop us Book £15.00
Add to basket