WR Chorley’s
Royal Air Force and
Australian Flying Corps
Squadron Losses
Volume 2: 1st July to 11th November 1918
The Royal Air Force was formed on 1st April 1918, by the amalgamation of the Royal Flying Corps and the Royal Naval Air Service.
Flying alongside the RAF were the squadrons of the Australian Flying Corps, forming a bond of alliance that persists to this day.
Life in the air was nasty, brutish and short for all too many of the aircrew. At the worst times, their life expectancy was no more than a few days.
Not only were they flying in aircraft of wood and canvas, rudimentary and often difficult to fly by today’s standards, but they were faced with a determined,
well-armed adversary who was equally capable in technological and operational terms.
Men and machines fell to earth by the hundreds, brought down by enemy fire,
mechanical failure or because the skills required to fly them in the prevailing conditions were momentarily too much for the less-experienced pilots who simply never got the chance to master their trade.
Bill Chorley’s great new work brings to the reader the details of all recorded casualties of these two powerful air forces, and serves as a tribute to those who gave their lives, often in the most awful of circumstances, a century ago.
Volume One covers the first three months of the RAF’s existence, 1st April to 30th June 1918,
whilst Volume Two takes the reader to the end of the First World War on 11th November 1918.
This unique two-volume title provides the most comprehensive record ever published of every squadron loss for the RAF in the Great War,
along with all AFC operational losses in the European theatre in the final months of that bloody conflict. 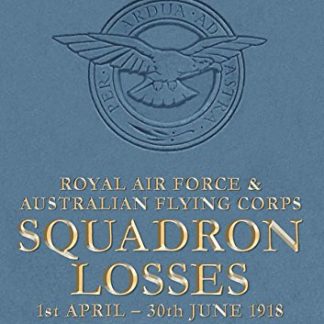