Winter of ’41
by Philip E West

Heavy snow during the winter of 1941 sometimes kept pilots and their
aircraft grounded, including Spitfire ‘G’ George assigned to Geoffrey Wellum.

The Primary Edition is signed by Flt. Lt Geoffrey Wellum DFC
(whose aircraft is featured in the painting) and the Artist Proofs are also signed by Flight Lieutenant R G (Bob) Large, DFC, Legion d’Honneur. Please see below for further details.
500 Prints in the Primary Edition
The Primary Edition prints are signed by the artist and
Squadron Leader Geoffrey Wellum DFC joined the RAF with a Short Service Commission in August 1939.
He joined no 92 Squadron flying Spitfires in June 1940 at the time of Dunkirk.
He flew throughout the Battle of Britain, later completing over 50 fighter sweeps and escorts over northern France and Belgium until August 1941.
And then joined 65 Squadron as Flight Commander in March 1942 operating over northern France and flew off Aircraft Carrier Furious on operation Pedestal to Malta.

(Geoff was a Flt. Lt. during “Operation Pedestal”) He returned to the UK as a test pilot Gloster Aircraft and finished the war as a Pilot Attack Instructor.
Squadron Leader Geoffrey Wellum DFC
Geoffrey Wellum
To give you some idea of the popularity of this book, sales to date have reached 250,000 copies!.

This print comes wrapped in clear cellophane to protect the print ready to give as a gift. 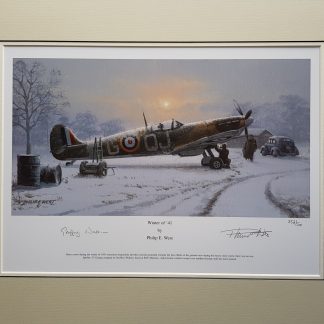