Formed at Farnborough in 1915 as an artillery observation unit,
10 Squadron was absorbed into the fledgling RAF before being disbanded for the first time in 1919.
The squadron reformed in 1928, specialising in night bombing. The outbreak of the Second World War saw 10 Sqn stationed at RAF Dishforth,
where it was the first operational unit to operate the Armstrong Whitworth Whitley twin-engined bomber.
On the night of 1st / 2nd October 1939, three Whitleys of 10 Sqn became the first RAF aircraft to undertake operational sorties over Berlin in WW2,
although they dropped leaflets rather than bombs. In very poor weather, one other Whitley did not reach the target.
After distributing its paperwork over Denmark the aircraft and crew tragically failed to return.
As part of No. 4 Group, Bomber Command, the squadron underwent subsequent moves to RAF Leeming and RAF Melbourne in the early years of the war. Whilst at Leeming, the venerable Whitley was replaced by the redoubtable Halifax bomber, Mks II and III being operated,
the latter type equipping 10 Sqn for the remainder of the war. In total, 10 Sqn’s crews carried out 609 operations, totalling 6233 sorties.
156 aircraft were lost, 2.5% of the total. The squadron is still operational in the present day, flying the Airbus Voyager in the transport / tanker role.
Overall size of Book 8.5 x 11 in, 396 pages,
10 Squadron Profile £15.00
10 Squadron Profile Book will include a free pack of Bomber Command Christmas cards worth £7.50

Be the first to review “10 Squadron Profile” Cancel reply 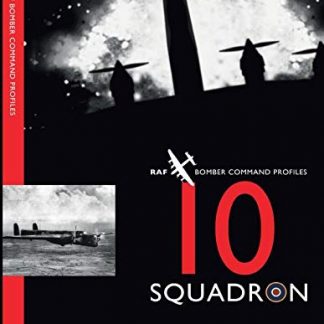