Formed as a bomber unit in June 1938 at Abingdon, 106 Squadron initially operated Hawker Hinds.
It soon re-equipped with the Fairey Battle before receiving its first Handley Page Hampdens in May 1939.
The Hampden was replaced in early 1942 by the Avro Manchester, which by then was approaching the end of its unspectacular service as a frontline bomber, after which it was replaced by the Lancaster in May 1942. From that point onwards the squadron participated in all of the Command’s campaigns,
and was often selected to take on special operations. After squadron CO Guy Gibson’s departure in March 1943 to form 617 Squadron for Operation Chastise,
the squadron continued to benefit from outstanding flight and squadron commanders, whose style was to lead from the front.
The squadron participated in many notable actions, including the first ‘Thousand Bomber Raid’, against Cologne in May 1942,
the low-level attack on the Schneider plant at Le Creusot, Peenemunde and shuttle raids to Italy,
before supporting the D-Day landings and attempting to obliterate the V1 and V2 menace in 1944. Its war was hard, but heroic, its entire purpose, perhaps, best summed up by the squadron motto; Per Libertarte (For Freedom).
Overall size of Book 8.5 in x 11 in.
106 Squadron Profile £15.00
106 Squadron Profile Book will include a free pack of Bomber Command Christmas cards worth £7.50

Be the first to review “106 Squadron Profile” Cancel reply 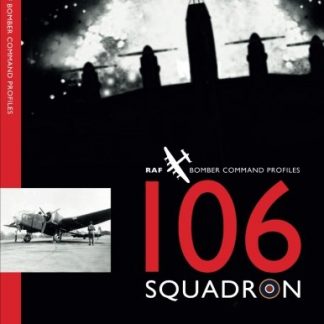