Returning from a raid over Lorient, France on the 17th May 1943 the Boeing B-17 Flying Fortress “Memphis Belle” came under close attack from Fw190s and Me109s.
Fortunately no aircraft were lost and very little damage sustained to the 91st Bomb Group aircraft during this mission.
The 25th and final one in the “Memphis Belle” for Captain Robert Morgan.
Named after Capt. Morgan’s wartime sweetheart, Miss Margaret Polk, the “Memphis Belle” was based at Bassingbourn, England.
And was the first B-17 to complete 25 combat missions and keep her entire crew alive – this at a time when eight out of ten aircraft were being shot down over Europe.
During ten months of service the “Memphis Belle” dropped over 60 tons of bombs on France, Belgium and Germany, shot down eight enemy fighters, and covered over 20,000 combat miles.
The “Memphis Belle” is now on display in Memphis, Tennessee. 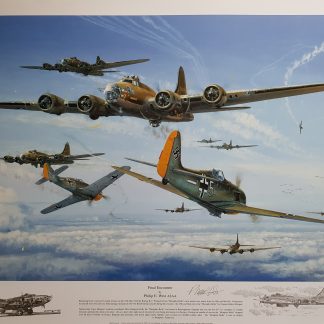