Another busy start to the day at Biggin Hill in the summer of 1940.
The Battle of Britain is at its height and 92 Squadron Spitfires with Geoffrey Wellum in ‘G’ for George, depart under early morning sunlight to engage a mass of incoming enemy aircraft over the southeast coast.
By the end of 1940 the Squadron was credited with having destroyed 127 German aircraft.

The Primary Edition is signed by Battle of Britain pilot Squadron Leader Flt.
Lt Geoffrey Wellum DFC (whose aircraft is featured in the painting) and the Artist Proofs are also signed by a further two Battle of Britan pilots. F

The Primary Edition is signed by the artist and:-

Squadron Leader Geoffrey Wellum DFC joined the RAF with a Short Service Commission in August 1939. He joined no 92 Squadron flying Spitfires in June 1940 at the time of Dunkirk. He flew throughout the Battle of Britain, later completing over 50 fighter sweeps and escorts over northern France and Belgium until August 1941. He then joined 65 Squadron as Flight Commander in March 1942 operating over northern France and flew off Aircraft Carrier Furious on operation Pedestal, to Malta. (Geoff was a Flt. Lt. during “Operation Pedestal”) He returned to the UK as a test pilot Gloster Aircraft and finished the war as a Pilot Attack Instructor.

the Artist Proofs are also signed by these Battle of Britain pilots:

Group Captain Billy Drake DSO, DFC*, DFC (US) joined the RAF on a Short Service Commission in July 1936. He joined No. 1 Squadron at RAF Tangmere in May 1937 flying the Hawker Fury before converting to the Hawker Hurricane.

He flew Hurricanes in France at the outbreak of war, scoring his first victory in May 1940. Having achieved two further victories over France he was shot down and wounded by a Messerschmitt BF 110. In October 1940 he returned to operational duty with No 213 Squadron at RAF Tangmere, flying Spitfires. Posted to the Western Desert in early 1942, Billy Drake took command of 112 Squadron, flying P40 Kittyhawks, leading them with considerable success. He later served in Malta, and then as Wing Leader of 20 Typhoon Wing. Billy Drake was an outstanding Ace, scoring 24 ½ victories and in addition, another 13 aircraft on the ground.

Although one of the only two pilots in this photo not to receive a DFC in June 1940 (having been shot down and wounded on 13 May), he was to end the war as the most successful of all this group of outstanding fighter pilots. He had by then been promoted to Wing Commander, and had claimed some 28 aircraft shot down (three of which were shared and two unconfirmed), plus 15 more destroyed on the ground. He had also been awarded a DSO, DFC and Bar, and a US DFC. He remained in the RAF post-war, becoming a Group Captain.

Wing Commander J.F.D, ‘Tim’ Elkington was born in 1920 and joined the RAF in 1939 and was commissioned as a Pilot Officer in July 1940. For further details we recommend visiting these web site pages
http://www.601squadron.com/Tim_Elkington.php
First Light – Spitfire By Philip West 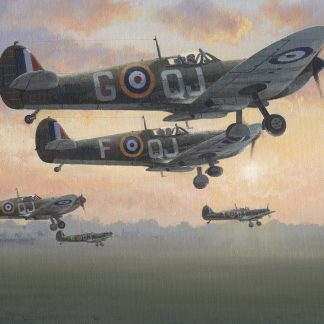