HMS Ark Royal IV – Flagship of the Flag Officer Aircraft Carriers – a mobile airfield and a most impressive sight as she launches a Phantom from one of her catapults. She had a standard displacement of 43,000 tons, a beam of 168 feet, and was 846 feet long. Ships company numbered 2,570 and her Air Group consisted of Phantom Interceptors, Buccaneer strike and Gannet AEW aircraft together with Wessex SAR and Sea King ASW helicopters. She served her Nation and the Royal Navy for 23 years and sailed 800,000 miles of valuable service, finally being decommissioned in 1979.

The Primary Edition is signed by Commander Neill Thomas DSC (Pilot) and the Artist Proofs have additionally been signed by a further two Phantom pilots.

For further details please see below

Lt Cdr David Braithwaite MBE MRAes MCIM (Pilot) started flying in 1964. He was with Front Line Sea Vixens from 1966 in 890, 892, 893, 899 Squadrons, before flying F4 Phantoms from 1971 to 1984 off Ark Royal and for 2 tours with the USN as a Warfare Instructor and Operational Test Director. He became Top Gun Qualified in 1972 and flew 6 types of F4 and 2 types F14 jets. David continued as the Senior Pilot on 809, 800 and 801 Squadrons Sea Harrier, having completed Weapons Evaluation on IFTU at Yeovilton. Greenwich and Aviation Staff trained and MOD Warrior in 1985. He has accrued over 1000 hrs in three operational types with in excess of 1400 fixed wing day and night deck landings. – and survived!

and the Artist Proofs are signed by the above pilot and:

Commodore Neill Thomas joined the Royal Navy in 1963 and commenced his flying training in 1965. He trained on the Jet Provost/ Hunter and flew Sea Vixens and F-4 Phantoms extensively from the old Ark Royal before commanding the Sea Harrier HQ Squadron (Trials, Operational Training and Chief Tactical Instructor for the Sea Harrier). He was embarked with his squadron in HMS Hermes during Operation Corporate in 1982. Following attendance of the Joint Service Defence College in 1984 he served on Operational and Ministry of Defence Staffs before being appointed to the new Ark Royal in command of her Air Group (Commander (Air)) in 1990. He then carried out language training before his appointment to South Korea as Naval and Air Attaché. On returning, he studied at the NATO Defence College in Rome followed by appointment to the NATO Airborne Early Warning Force Command, initially as Deputy then as the Force Commander.
He was awarded the CBE in 2000 and DSC in 1982. He retired from the Royal Navy in 2001.
HMS Ark Royal Phantom By Philip West

Commander Neville Featherstone RN (Pilot) did National Service in the Royal Navy, ending up as a Sub Lieutenant aboard a minesweeper.

He then read Law at London University for a year at the end of which his tutors advised that they saw little future for him as a lawyer – a blessing in disguise, as he rejoined the Navy and trained as a fixed wing pilot. He did two front-line tours east of Suez flying Sea Vixens from the carrier HMS Centaur. On return to the UK he qualified as a Flying Instructor (QFI) and spent two years at RNAS Brawdy in Wales teaching ‘pipe-line’ pilots to fly the swept wing Hunter. Towards the end of this appointment he was invited to go to the US Naval Air Station Miramar at San Diego, California to fly the F4 Phantom. This was at a time when the USN was suffering heavy losses in Vietnam and was fully stretched to train sufficient replacements. More importantly it provided invaluable experience on the Phantom which had been ordered by the Royal Navy as a replacement for the Sea Vixen.

In 1968 when the first RN Phantoms arrived at RNAS Yeovilton he joined 700P, the Intensive Flying Trials Unit. This metamorphosed into 767 Squadron where as QFI and Senior Pilot he was responsible for training naval crews for the front-line 892 Squadron and RAF crews for the first Squadron to re-equip with the Phantom. During these happy times he was the Navy’s aerobatic display pilot in that most exciting of aircraft, the Phantom. Subsequently he flew the Hawker Siddeley 125 in the joint service VIP squadron at Northolt. He commanded 750 Naval Air Squadron at RNAS Culdrose and, after completing the Canadian Staff Course, carried out staff jobs in MOD and SHAPE Belgium, before retiring as a Commander in 1987. 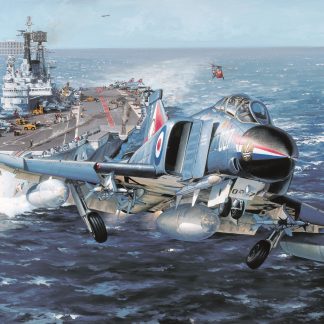