Based at Ludford Magna, Lincolnshire from June 1943, 101 Squadron was selected to test new equipment designed to jam the VHF frequencies used by German fighter controllers. A system, code-named “Airborne Cigar” or ABC for short, was operated by a eighth crew member – the Special Operator on board the Lancaster bomber who could understand German and listen into the German controller’s transmissions, jamming them before they alerted their night fighters to the position of the bombers. ABC soon proved its worth and from October 1943 101 Sqn. ABC aircraft flew with all Bomber Command main force attacks, consequently 101 Squadron suffered higher losses than other 1 Group Squadrons. In an attempt to reduce the losses the Squadron was the first to be fitted with twin 0.5 browning machine guns in the rear turret.

The Primary Edition is signed by:
Maximum Effort Avro Lancaster By Philip West

Flt Lt Russell (Rusty) Waughman DFC, AFC, (Pilot) volunteered for the RAF in 1941. After training in Canada, he qualified as a heavy bomber pilot. In November 1943 he was posted to No 101(Special Duties) Squadron at Ludford Magna. He completed a tour of operations, which began during the ‘Battle of Berlin’, where they did several operations. Surviving a mid-air collision, only to write the aircraft off on landing, ‘Rusty’ and his crew on a subsequent flight had a miraculous escape when their aircraft was blown upside down, over the target, at Mailly-le-Camp; they also survived the Nuremberg raid on 30th March 1944, when 97 aircraft were lost – including about one quarter of 101 sqn strength that night.
Maximum Effort Avro Lancaster By Philip West 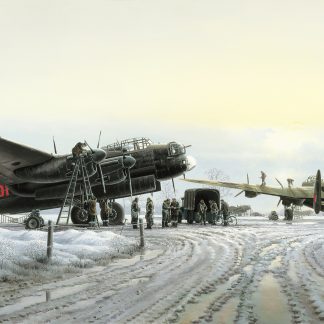