Night of Heroes Lancaster – The Dambusters By Philip West

Night of Heroes Lancaster – The Dambusters By Philip West

Overall size of all prints approx. 13” x 19” (33 x 48cms)
This is a smaller size print
This print is available in a larger size on our web site.

17th May 1943. Lancaster’s from 617 Squadron deliver a surprise attack on the Ruhr dams with specially designed, unique bouncing bombs invented by Barns Wallis. Wing Commander Guy Gibson is shown drawing defensive fire away from
Flt Lt Maltby’s aircraft as it passes over the Mohne, just as his mine explodes
and breaches the dam.

These prints are signed by men who actually flew on this daring raid.

Please see below for details of the signatories of this edition.

750 Prints in the Primary Edition £90.00
Night of Heroes Lancaster – The Dambusters By Philip West

Philip West is recognised as one of the world’s finest aviation artists. Collectors of his original oil paintings span the globe, many waiting patiently for his next breathtaking canvas to appear. Self taught, Philip has won many accolades for his paintings, not the least of which was the prestigious Duane Whitney Award for Excellence at the 1997 American Society of Aviation Artists Exhibition.

Squadron Leader George ‘Johnny’ Johnson DFM (Bomb Aimer, 617 Squadron) went initially to the USA for pilot training. Frustrated at not qualifying and a burning desire to get airborne Johnny applied for the shortest possible training course; air gunner. having completed this course successfully Johnny was posted to 97 Squadron as ‘spare’ gunner – mid or upper, whichever was needed. At this time Bomb Aimers were being sought for the Lancasters and as this position warranted extra pay, Johnny applied and passed the training course. He was then chosen by Joe McCarthy to join his crew before they were all transferred to 617 Squadron.

Flying in AJ-T, with American pilot Joe McCarthy and crew they attacked the Sorpe Dam from 30 feet, for which Johnny was awarded the DFM. Johnny went on to fly 40 missions with Joe McCarthy at the controls
Night of Heroes Lancaster – The Dambusters By Philip West 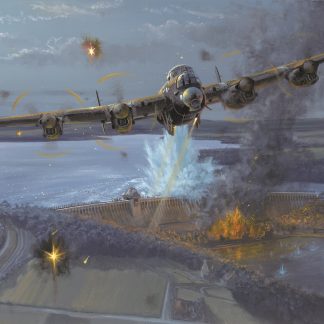 You're viewing: Night of Heroes Lancaster – The Dambusters By Philip West £90.00
Add to basket